The wonders and Delights of Tokyo

Tokyo (東京, Tōkyō) is Japan’s capital and the world’s most populous metropolis. It is also one of Japan’s 47 prefectures, consisting of 23 central city wards and multiple cities, towns and villages west of the city center. The Izu and Ogasawara Islands are also part of Tokyo.

Prior to 1868, Tokyo was known as Edo. A small castle town in the 16th century, Edo became Japan’s political center in 1603 when Tokugawa Ieyasu established his feudal government there. A few decades later, Edo had grown into one of the world’s most populous cities. With the Meiji Restoration of 1868, the emperor and capital moved from Kyoto to Edo, which was renamed Tokyo (“Eastern Capital”). Large parts of Tokyo were destroyed in the Great Kanto Earthquake of 1923 and in the air raids of 1945. Today, Tokyo offers a seemingly unlimited choice of shopping, entertainment, culture and dining to its visitors.

The city’s history can be appreciated in districts such as Asakusa, and in many excellent museums, historic temples and gardens. Contrary to common perception, Tokyo also offers a number of attractive green spaces in the city center and within relatively short train rides at its outskirts. 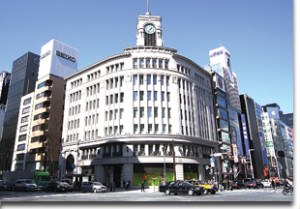 The Ginza (銀座) is Tokyo’s most famous upmarket shopping, dining and entertainment district, featuring numerous department stores, boutiques, art galleries, restaurants, night clubs and cafes. One square meter of land in the district’s center is worth over ten million yen, making it one of the most expensive real estate in Japan. It is where you can find the infamous $10 cups of coffee and where virtually every leading brand name in fashion and cosmetics has a presence. From 1612 to 1800, today’s Ginza district was the site of a silver coin mint (Ginza means “silver mint” in Japanese), after which the district was eventually named. The Ginza evolved as an upmarket shopping district following the 1923 Great Kanto Earthquake. Most shops in the Ginza district are open every day of the week. A visit is most pleasant on weekend afternoons when the central Chuo Dori street is closed to automobile traffic and become a large pedestrian zone. The road closure takes place from 12:00 to 17:00 (until 18:00 from April through September). 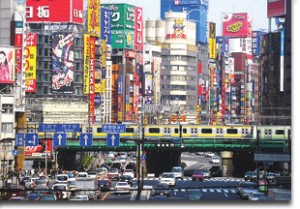 Shinjuku (新宿) is one of the 23 city wards of Tokyo, but the name commonly refers to just the large entertainment, business and shopping area around Shinjuku Station. Shinjuku Station is the world’s busiest railway station, handling more than two million passengers every day. It is served by about a dozen railway and subway lines, including the JR Yamanote Line. Shinjuku is also one of Tokyo’s major stops for long-distance highway buses and city buses. West of the station is Shinjuku’s skyscraper district, home to many of Tokyo’s tallest buildings, including several premier hotels and the twin towers of the Metropolitan Government Office, whose observation decks are open to the public for free. Northeast of the station lies Kabukicho, Japan’s largest and wildest red light district, while department stores, subterranean malls and electronic shops surround Shinjuku Station on all four sides, including the recently redeveloped Southern Terrace. 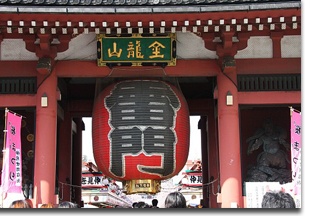 Asakusa (浅草) is the center of Tokyo’s shitamachi (literally “low city”), one of Tokyo’s districts, where an atmosphere of the Tokyo of past decades survives. Asakusa’s main attraction is Sensoji, a very popular Buddhist temple, built in the 7th century. The temple is approached via the Nakamise, a shopping street that has been providing temple visitors with a variety of traditional, local snacks and tourist souvenirs for centuries. Asakusa can easily be explored on foot. Alternatively, you can consider a guided tour on a rickshaw (jinrikisha, literally “man powered vehicle”). A 30 minute tour for two persons costs around 8000 yen. Shorter and longer courses are also available. For many centuries, Asakusa used to be Tokyo’s leading entertainment district. During the Edo Period (1603-1867), when the district was still located outside the city limits, Asakusa was the site of kabuki theaters and a large red light district. In the late 1800s and early 1900s, modern types of entertainment, including movie theaters, set foot in Asakusa. 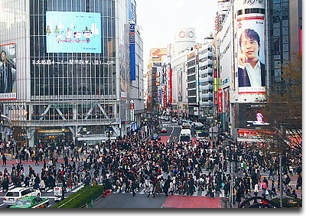 Shibuya (渋谷) is one of the twenty-three city wards of Tokyo, but often refers to just the popular shopping and entertainment area found around Shibuya Station. In this regard, Shibuya is one of Tokyo’s most colorful and busy districts, packed with shopping, dining and nightclubs serving swarms of visitors that come to the district everyday. Shibuya is a center for youth fashion and culture, and its streets are the birthplace to many of Japan’s fashion and entertainment trends. Over a dozen major department store branches can be found around the area catering to all types of shoppers. Most of the area’s large department and fashion stores belong to either Tokyu or Seibu, two competing corporations. 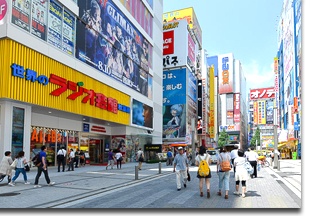 Akihabara (秋葉原), also called Akiba after a former local shrine, is a district in central Tokyo that is famous for its many electronics shops. In more recent years, Akihabara has gained recognition as the center of Japan’s otaku (diehard fan) culture, and many shops and establishments devoted to anime and manga are now dispersed among the electronic stores in the district. On Sundays, Chuo Dori, the main street through the district, is closed to car traffic from 13:00 to 18:00 (until 17:00 from October through March). Akihabara has been undergoing major redevelopment over the years, including the renovation and expansion of Akihabara Station and the construction of new buildings in its proximity. Among these newly opened buildings were a huge Yodobashi electronics store and the Akihabara Crossfield, a business complex with the aim of promoting Akihabara as a center for global electronics technology and trade. 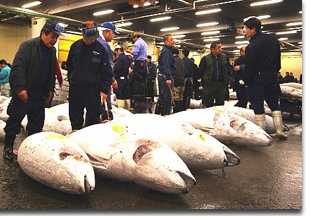 Tsukiji Market (築地市場, Tsukiji Shijō) is a large wholesale market for fish, fruits and vegetables in central Tokyo. It is the most famous of over ten wholesale markets that handle the distribution of fish, meat, produce and flowers in Tokyo. Tsukiji Market is best known as one of the world’s largest fish markets, handling over 2,000 tons of marine products per day. It is scheduled to move to a new site in Toyosu in November 2016. The sight of the many kinds of fresh fish and other seafood and the busy atmosphere of scooters, trucks, sellers and buyers hurrying around, make Tsukiji Market a major tourist attractions. In fact, the numbers of visitors have increased so much over recent years, that they have become a problem to the course of business, as the aging market’s infrastructure was not anticipated to serve as a tourist spot.