Takayama (高山) is a city in the mountainous Hida region of Gifu Prefecture. To differentiate it from other places named Takayama, the city is also commonly referred to as Hida-Takayama. Takayama retains a traditional touch like few other Japanese cities, especially in its beautifully preserved old town. It now ranks as one of the prime candidates among travelers wishing to add a rural element into their itineraries. Takayama gained importance as a source of high quality timber and highly skilled carpenters during the feudal ages. The city was consequently put under direct control of the shogun and enjoyed quite a bit of prosperity considering its remote mountain location. The Takayama Festival, held in spring and autumn, is considered one of Japan’s best festivals. 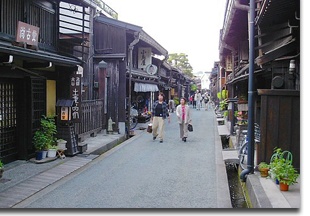 Takayama’s old town (上三之町) has been beautifully preserved with many buildings and whole streets of houses dating from the Edo Period (1600-1868), when the city thrived as a wealthy town of merchants. The southern half of the old town, especially the Sannomachi Street, survives in a particularly pretty state with many old homes, shops, coffee houses and sake breweries, some of which have been in business for centuries. The shops in the area are typically open daily from 9:00 to 17:00. Several homes in the old town open their doors to the public. They provide a glimpse behind the facade into the former living quarters of the local merchants and exhibit traditional household goods and local arts and crafts. 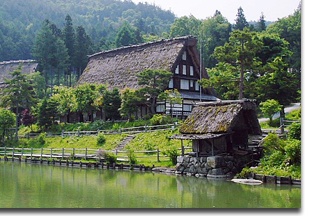 Hida Folk Village (飛騨の里, Hida no Sato) is an open air museum exhibiting over 30 traditional houses from the Hida region, the mountainous district of Gifu Prefecture around Takayama. The houses were built during the Edo Period (1603 – 1867) and were relocated from their original locations to create the museum in 1971.

In a village-like atmosphere, the museum features buildings such as the former village head’s house, logging huts, storehouses and a number of gassho-zukuri farmhouses. These massive farmhouses are named after their steep thatched roofs which resemble a pair of hands joined in prayer (“gassho”). They were moved here from nearby Shirakawago, where gassho-zukuri houses are the reason for the region’s World Heritage status. 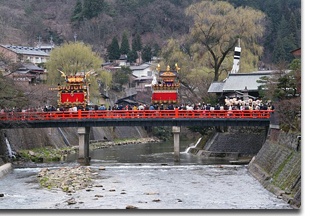 The Takayama Festival (高山祭, Takayama Matsuri) is ranked as one of Japan’s three most beautiful festivals alongside Kyoto’s Gion Matsuri and the Chichibu Yomatsuri. It is held twice a year in spring and autumn in the old town of Takayama and attracts large numbers of spectators.
The Spring Festival (April 14-15) is the annual festival of the Hie Shrine in the southern half of Takayama’s old town. Since the shrine is also known as Sanno-sama, the spring festival is also called Sanno Festival.

Likewise, the Autumn Festival (October 9-10) is the annual festival of the Hachiman Shrine in the northern half of the old town, and the festival is also known as Hachiman Festival.

The spring and autumn festivals have similar attractions and schedules. Each festival features its own set of about a dozen festival floats (yatai). During the year, the tall and heavily decorated floats are stored in storehouses, which are scattered across Takayama’s old town (except the floats exhibited in the Yatai Kaikan). A set of replica floats are, furthermore, exhibited around the year at the Matsuri no Mori festival museum. 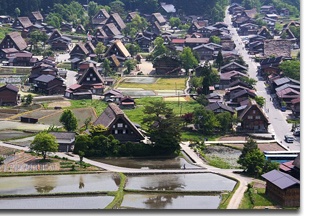 The Shirakawa-go (白川郷) and neighboring Gokayama regions line the Shogawa River Valley in the remote mountains that span from Gifu to Toyama Prefectures. Declared a UNESCO world heritage site in 1995, they are famous for their traditional gassho-zukuri farmhouses, some of which are more than 250 years old.

Ogimachi is the largest village and main attraction of Shirakawa-go. The farmhouses are quite amazing structures, designed to withstand the harsh winters while providing a place to work and live, and are best seen either covered in snow or surrounded by green fields. Many of the farmhouses are now restaurants, museums or minshuku, where you can stay overnight. Ogimachi is the transport hub of the Shirakawa-go region, where the bus lines from Takayama, Nagoya, Kanazawa and Takaoka meet. There are two main bus stops: “Shirakawa-go” bus stop outside the open air museum and “Ogimachi” bus stop north of the village center. Ogimachi is small and can be easily explored on foot. 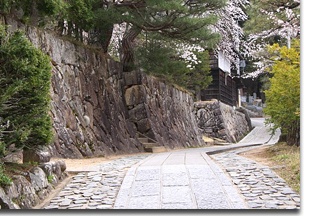 Along the 3.5 kilometer long course, you will pass more than a dozen common temples and shrines, the ruins of Takayama’s former castle and ordinary scenes of a rural Japanese town. While the Higashiyama Walking Course is by no means a stunning sightseeing experience, it offers a pleasant way to spend one or two hours and get to know Takayama’s calmer side.