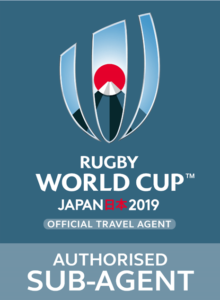 Are you looking for professionally organised Rugby World Cup™ 2019 packages from Australia that are packed with loads of sightseeing opportunities as well as rugby fun? Well, you’ve come to the right place, because at JTB Australia we’ve put together package deals for the Rugby World Cup™ 2019 that blend world cup fever with wanderlust that cannot be matched.

To chat with one of our friendly consultants right away on the Rugby World Cup™ 2019 packages from Australia on offer from JTB Australia, call us now on 1300 739 330.

Our tour packages are centred around Australia’s matches, allowing time in between for our tour groups to explore a variety of bustling Japanese cities like Tokyo and Kyoto as well as smaller more ancient areas like Nikko, Shirakawago and Hiroshima.

Take a look at the tour packages on offer and find out which one fits you best today.

Spend 25-days travelling Japan as you support your favourite team to victory through all four of their qualifying Pool D group matches. The Grand Tour of Japan is the ultimate tour package for the dedicated Wallaby supporter and will guarantee you a great seat to watch the Australia vs Fiji, Australia vs Wales, Australia vs Uruguay and Australia vs Georgia matches.

Interspersed in between the matches are days spent travelling and sightseeing across beautiful Japan. With an experienced tour guide by your side, The Grand Tour of Japan will allow you to see the most auspicious and beautiful parts that Japan has to offer. All transfers and travel arrangements are included in the tour package. Rugby World Cup™ 2019 accommodation in three- and four-star hotels are included as well.

For the rugby buff who can’t spend a month away from home, the Two Pool Match Tour might be better suited to your needs. This shorter tour package is only 13 nights and 14 days and is centred around watching two of Australia’s epic qualifying match clashes, namely; Australia vs Fiji and Australia vs Wales. Even though this package might be shorter, it still packs as much punch as any other tour.

An experienced tour guide will whisk you around the cities of Sapporo, Tokyo, Nara and Kyoto (to name a few) as you experience a once-in-a-lifetime cultural and touring explosion. All transport is included in the package as is accommodation options at three- and four-star hotels for the entire tour too.

Join in rugby fever after the qualifying match round with this epic tour package that includes tickets to the semi-finals, bronze final and the grand final of the competition. You’ll be front and centre as you watch the best rugby teams in the world battle it out for world cup glory.

The tour is fully-escorted and spans for 10 nights and 11 days. Your tour guide will show you the most delightful sights and sounds of a variety of Japanese cities and regions. Tours and transport are fully included in this package. Accommodation is pre-arranged at some of the most excellent three- and four-star hotels available in each city.

See a full itinerary and tour inclusions about the Semi-finals, Bronze final & the Final Tour.

Plan your own itinerary between games as you select the ticket and accommodation options that best suit you. We’ve put together bespoke hotel packages across the entire competition, from Australian qualifying matches to anticipated final game, that includes stays at three- and far-star hotels. Find your own way between games and explore the regions at your leisure when choosing a hotel package for you. For a full itinerary and tour inclusions we have on offer, view our Hotel Packages page.

Learn more about our action-packed 2019 tour or hotel packages and Contact us to book yourself on a Rugby World Cup™ 2019 tour to Japan today!