Rugby World Cup™ fever kicks off in September 2019 in Japan, marking the start of the first world cup ever to be played in Asia. Fans from around the world will descend on this iconic East Asian country to support their favourite teams throughout the famous competition. World Cup victory will be on the minds of every fan and every player, culminating in the much-anticipated final match to crown one team the victor.

At JTB Australia, we are proud to be an official Rugby World Cup™ 2019 travel agent and authorised sub-agent for the competition. We have put together five once-in-a-lifetime tour and hotel package offers from Australia that are guaranteed to suit every rugby fanatic’s dreams.

If you’re wondering what the Rugby World Cup™ 2019 dates are, you’ve come to right place. Qualifying matches start on Friday 20 September 2019 and run until Sunday 13 October 2019. The Quarter-finals, semi-finals, bronze final and the final match will be played after that.

16 teams from across the world have been split into four groups or pools. The pools have been randomly selected as: 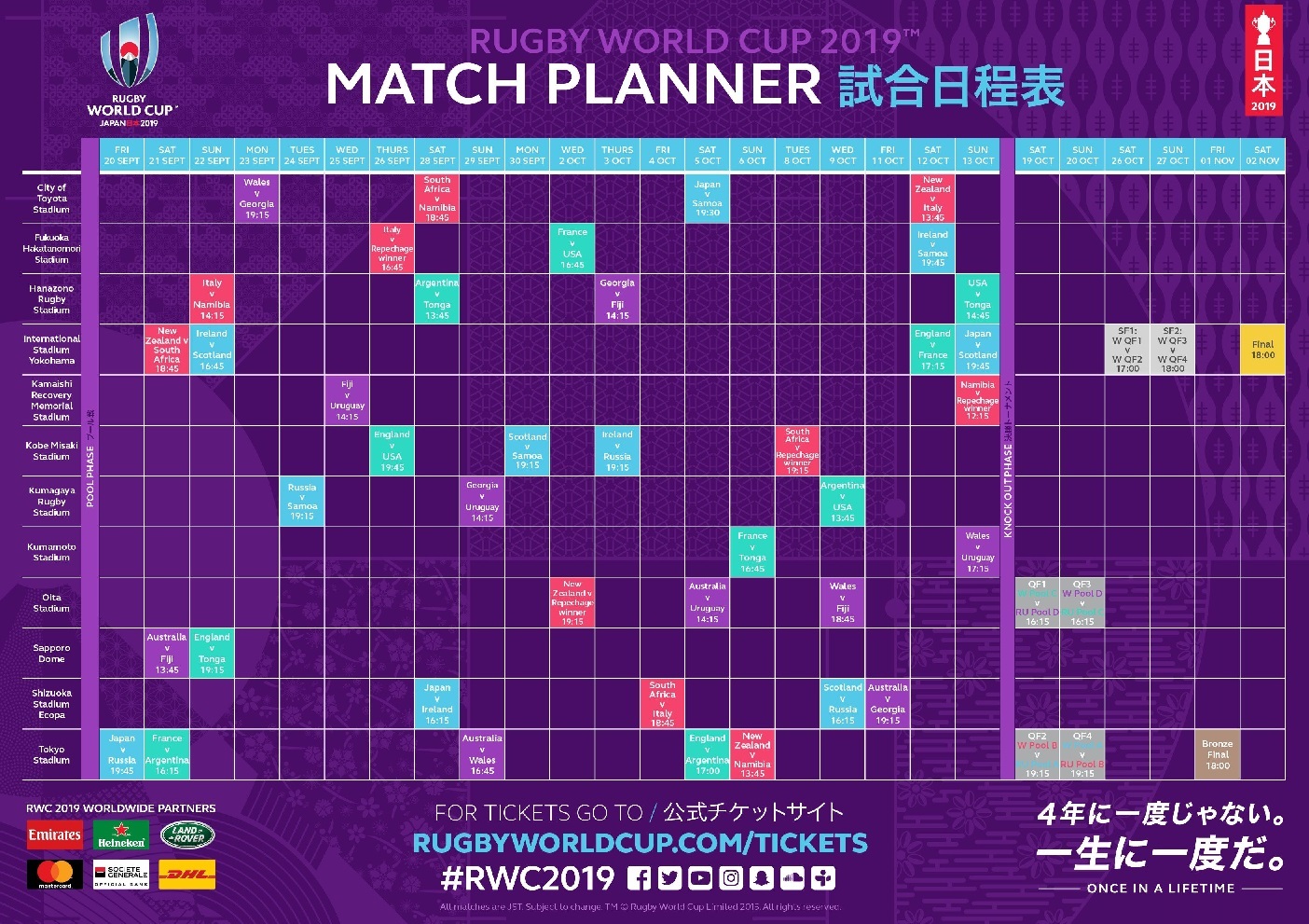 Each team in every pool will have to play each other once through the qualifying match stage. Only the winner and runner-up from each pool will move through to the quarter-final stage of the competition.

View a full list of the qualifying match schedule, including times and venues. or view our Rugby 2019 World Cup ticket packages.

Are you wondering what time the Rugby World Cup™ 2019 is on? Luckily for us, there is only a one-hour time difference between Japan and Australia, so all matches will be able to be watched in Australia within an hour of the suggested start time. No getting up at the crack of dawn or staying up until midnight to watch a game on the telly.

The quarter-finals of the Rugby World Cup™ will be played on Saturday 19th and Sunday 20th October 2019.

The quarter-final schedule is as follows:

Quarter-final 2: Winner of Pool B v Runner Up Pool A

Quarter-final 4: Winner of Pool A v Runner Up of Pool B

As the competition nears to a close, the tension mounts as the winning teams are narrowed down. The two semi-finals will be played on Saturday 26 October and Sunday 27 October 2019.

The semi-final schedule is as follows:

Be a part of the world cup fever in 2019 by booking your spot on a fully-escorted JTB Australia tour or hotel package. Don’t miss out and contact JTB Australia today, visit us at our Sydney or Melbourne branches or complete our online contact form for more information.