Osaka has population of 2.6 million, is the second largest metropolis to Tokyo, here is not just a travel spot. The dynamic populations of the region’s communities have nurtured a rich variety of culture and history. It is also know as an industrial district, introducing cutting-edge technologies, and as a commercial city of mega facilities. Osaka ‘s attractive tourist spots such as skyscrapers, lively downtown areas, and theme parks, are everywhere. Welcome to Osaka, where you have the advantage of all the enjoyments in one city! 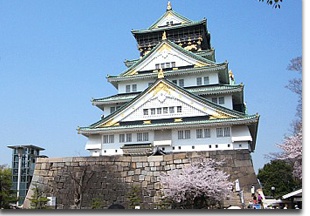 The construction of Osaka Castle (大阪城, Ōsakajō) started in 1583 on the former site of the Ishiyama Honganji Temple, which had been destroyed by Oda Nobunaga thirteen years earlier. Toyotomi Hideyoshi intended the castle to become the center of a new, unified Japan under Toyotomi rule. It was the largest castle at the time.

However, a few years after Hideyoshi’s death, Tokugawa troops attacked and destroyed the castle and terminated the Toyotomi lineage in 1615. Osaka Castle was rebuilt by Tokugawa Hidetada in the 1620s, but its main castle tower was struck by lightening in 1665 and burnt down.

It was not until 1931 that the present ferro-concrete reconstruction of the castle tower was built. During the war it miraculously survived the city wide air raids. Major repair works gave the castle new glamor in 1997. The castle tower is now entirely modern on the inside and even features an elevator for easier accessibility. It houses an informative museum about the castle’s history and Toyotomi Hideyoshi. 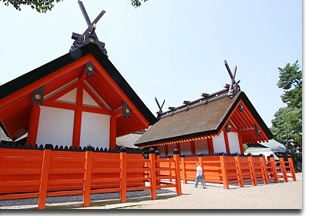 Osaka’s Sumiyoshi Taisha (住吉大社, “Sumiyoshi Grand Shrine”) is one of Japan’s oldest shrines. Founded in the 3rd century before the introduction of Buddhism, it displays a unique style of shrine architecture, called Sumiyoshi-zukuri, that is free of influence from the Asian mainland. Only two other shrine architecture styles are also considered purely Japanese: Shinmei-zukuri as seen at the Ise Shrines and Taisha-zukuri as seen at Izumo Taisha.

Sumiyoshi Taisha is the main and most famous of over two thousand Sumiyoshi shrines found across Japan. Sumiyoshi shrines enshrine the kami (Shinto gods) who protect travelers, fishermen and sailors at sea. The shrines are therefore usually found close to harbors. 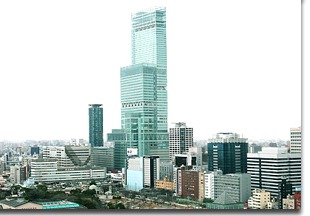 Standing at 300 meters, Abeno Harukas (あべのハルカス) in Osaka is the tallest skyscraper in Japan. The building stands on top of the Kintetsu Osaka Abenobashi Station and is conveniently located across from JR Tennoji Station. It houses a department store, an art museum, a hotel and an observation deck.

The observation deck is called “Harukas 300” and occupies the building’s top three floors (floors 58 to 60). The observation deck is accessed by elevators from the 16th floor. With large floor-to-ceiling glass panels all around, the 60th floor offers 360 degree views of Osaka, while the 58th floor features an attractively designed inner court with a wooden deck and cafe. A souvenir shop and restrooms with views are also available.

There is a brand-new hotel is located in Japan’s tallest named Osaka Marriott Miyako Hotel. Complex and guests can enjoy the spectacular sweeping views of Osaka. Stay at this member hotel of an internationally renowned group and experience its unparalleled hospitality. 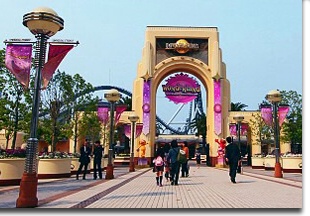 Universal Studios Japan (USJ) was the first theme park under the Universal Studios brand to be built in Asia. Opened in March 2001 in the Osaka Bay Area, the theme park occupies an area of 39 hectares and is the most visited amusement park in Japan after Tokyo Disney Resort.

Universal Studios Japan currently has eight sections: Hollywood, New York, San Francisco, Jurassic Park, Waterworld, Amity Village, Universal Wonderland and The Wizarding World of Harry Potter. Visitors are able to enjoy many amusement rides, ranging from child-friendly carousels to thrilling roller coasters and simulators based on popular movies such as Spiderman, Back to the Future, Terminator 2 and Jurassic Park. 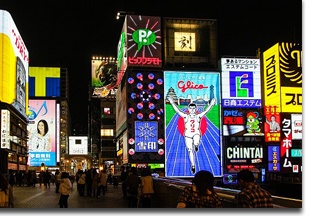 Located around Namba Station, Minami (南, “South”) is one of Osaka’s two major city centers. It is the city’s most famous entertainment district and offers abundant dining and shopping choices. The district is easily accessible as it is served by three train companies as well as three subway lines and a highway bus terminal. The other major city center is Kita (北, “North”) which is located around Osaka and Umeda Stations.
Best shopping street here is Dotonbori, it’s never truly closes with some restaurants open 24 hours.
One of Osaka’s most popular tourist destinations, this street runs parallel to the Dotonbori canal. It is a popular shopping and entertainment district and is also known as a food destination. At night it is lit by hundreds of neon lights and mechanized signs, including the famous Glico Running Man sign and Kani Doraku crab sign. 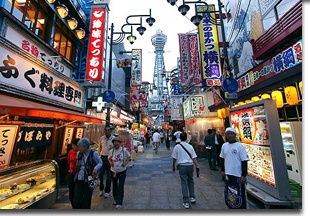 Shinsekai (新世界) is Osaka’s “new world,” a district that was developed before the war and then neglected in the decades afterwards. At the district’s center stands Tsutenkaku Tower, the nostalgia evoking symbol of Shinsekai.

The area was developed into its current layout following the success of the 1903 National Industrial Exposition, which brought over five million people to the neighborhood within just five months. Shortly after the expo closed its doors, work began to improve and update Shinsekai.

Another noted attraction is kushikatsu, one of Osaka’s best known specialties. It is a dish, composed of various skewered, battered and deep fried foods. Varieties on offer range from chicken and beef, to pumpkin and asparagus, to the banana and ice cream dessert varieties. Many of Shinsekai’s kushikatsu restaurants are open 24 hours, but only truly come alive when the lights come on at night.