Okinawa (沖縄県, Okinawa-ken) is Japan’s southernmost prefecture, consisting of a few dozen, small islands in the southern half of the Nansei Shoto, the island chain which stretches over about one thousand kilometers from Kyushu to Taiwan. Okinawa Prefecture can be divided into three major island groups, the Okinawa Islands (Okinawa Shoto) around Okinawa Island (Okinawa Honto), the Miyako Islands (Miyako Retto) around Miyako Island and the Yaeyama Islands (Yaeyama Retto) around Ishigaki Island.

Okinawa’s climate is subtropical, with temperatures barely falling below 15 degrees in winter. The seas surrounding Okinawa’s islands are considered among the world’s most beautiful with coral reefs and abundant marine wildlife. Consequently, snorkeling and scuba diving are among Okinawa’s top attractions. The islands making up Okinawa Prefecture, are also known as the Ryukyu Islands, named after the native culture, which is distinctly different from that of the rest of Japan in terms of language, cuisine, arts, etc. 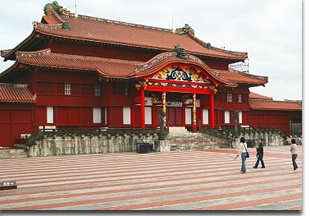 A city district of Naha today, Shuri is the name of the former capital of the Ryukyu Kingdom. Shuri Castle (首里城, Shurijō) served as the administrative center and residence of the Ryukyu kings for several centuries until Okinawa became a Japanese prefecture in 1879. The castle is included as one of the UNESCO World Heritage designated Castles of the Ryukyu Kingdom sites.

Shuri Castle was originally built in the late 1300s, and played an integral role in the political unification of the island. Wars and fires destroyed the castle multiple times over the centuries, most recently in the Battle of Okinawa in 1945. The current buildings are beautiful reconstructions dating from 1992. The approach to the castle’s central buildings leads through multiple gates, including the well known Shureimon Gate. The castle’s hilltop location allows for nice views over Naha along the way. 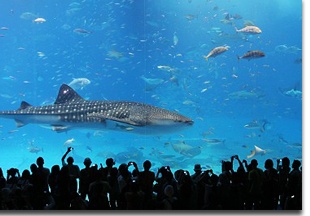 The Churaumi Aquarium (美ら海水族館) is widely considered Japan’s best aquarium. It is the main attraction of the Ocean Expo Park on the former grounds of the 1975 International Ocean Expo in northern Okinawa Honto. The aquarium was completely redesigned and reopened in 2002.
The highlight of a visit to the Churaumi Aquarium is the massive Kuroshio Tank, one of the largest in the world. The tank takes its name from the warm Kuroshio current which plays a large part in the variety of Okinawa’s of marine life. The tank contains a wide variety of species, the most striking of which are the giant whale sharks and manta rays.

In addition to the main aquarium building, there are a few outdoor pools near the waterfront where animal shows of dolphins, sea turtles and manatees can be viewed free of charge. There are only a few shows per day, so visitors might want to check show times before entering the aquarium. 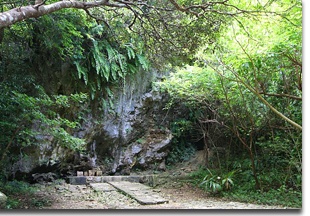 Sefa Utaki (斎場御嶽) is an important sacred site of the indigenous Okinawan religion, which, similar to Shinto, places emphasis on the worship of nature. The site is located on a densely forested hillside along the ocean and features several rock formations, which are connected with each other by walking trails. Sefa Utaki is included as one of Okinawa’s World Heritage sites.

Although regarded as a powerful spiritual site beforehand, it was in the early 16th century that Sefa Utaki came into prominence. During this period the Okinawan religion underwent reorganization and centralization under the royal government, and Sefa Utaki became one of the main locations for religious ceremonies and rituals. Reflecting the strong connection between the royal family and the religion, the sites for prayers at Sefa Utaki were named after important places in Shuri Castle. 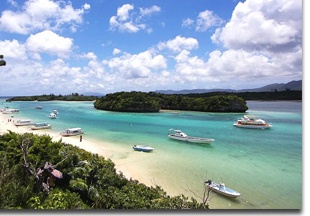 The Yaeyama Islands(八重山列島) are both the southernmost and westernmost inhabited islands of Japan. Together with the Miyako Islands and the Okinawa Islands they make up the three main island chains of Okinawa Prefecture.

With their tropical atmosphere and laid back, rural lifestyle, the Yaeyama Islands are a popular getaway destination for those wishing to escape the hustle and bustle of Japan’s metropolises. This island paradise offers beaches, snorkeling, diving and relaxation.

Of the Yaeyama Islands, Ishigaki Island is the most populated and serves as the region’s transportation hub. Other islands include the jungle covered Iriomote Island and Taketomi Island, famous for its beautifully preserved, traditional Ryukyu village. Five additional islands comprise the rest of the island chain and offer beaches, snorkeling and diving. 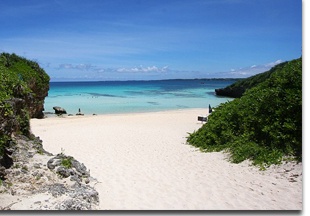 Miyako Island (宮古島, Miyakojima), located 300 kilometers south of Okinawa Main Island and 100 kilometers north of the Yaeyama Islands, is known for some of Japan’s best beaches and as a great destination for snorkeling and diving in the coral reefs. The sub tropical climate provides mild weather year around.
Beaches are Miyako’s most famous attraction. There are picturesque sand beaches for swimming and relaxing and coral reefs that provide excellent snorkeling. While the beaches are open year round, they are best enjoyed from April to November when the air temperature consistently tops 25 degrees and the water is very warm.

When enjoying the beaches, beware of strong currents that can pull you out to sea and poisonous creatures such as Habu Jellyfish, a type of box jellyfish, that is most prevalent from June to October. Although jellyfish stings are rare, if stung you should pour vinegar over the sting, remove any tentacles, and seek medical help as it may become life threatening if left untreated. 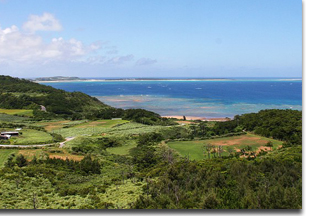 Kume Island (久米島, Kumejima) is one of the islands that make up the Okinawa Shoto island group. It is located about 90 kilometers west of Okinawa Honto. Like many other of the small islands surrounding Okinawa Honto, Kumejima offers a much less developed version of the beaches and Okinawan culture for which the prefecture is well known. Kumejima is quite small, and traveling from one end of the island to another rarely involves a journey longer than ten kilometers.

Like elsewhere in Okinawa, the beaches of Kumejima, snorkeling and diving are among the principal attractions for visitors. Hatenohama Beach, an approximately seven kilometer long sand bar surrounded by water just east of the island, is Kumejima’s most famous attraction. The beach is highly regarded for its white sand, but can only be accessed by joining a tour. The other beaches of Kumejima are also quite attractive, and are generally less busy than the beaches found on Okinawa Honto.