Japan’s first permanent capital was established in the year 710 at Heijo, the city now known as Nara (奈良). As the influence and political ambitions of the city’s powerful Buddhist monasteries grew to become a serious threat to the government, the capital was moved to Nagaoka in 784.

Nara is located less than one hour from Kyoto and Osaka. Due to its past as the first permanent capital, it remains full of historic treasures, including some of Japan’s oldest and largest temples.

The main areas in Nara include: 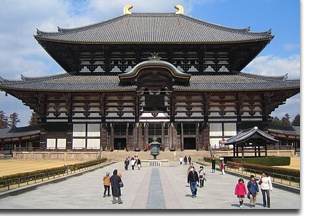 Todaiji (東大寺, Tōdaiji, “Great Eastern Temple”) is one of Japan’s most famous and historically significant temples and a landmark of Nara. The temple was constructed in 752 as the head temple of all provincial Buddhist temples of Japan and grew so powerful that the capital was moved from Nara to Nagaoka in 784 in order to lower the temple’s influence on government affairs.

Todaiji’s main hall, the Daibutsuden (Big Buddha Hall) is the world’s largest wooden building, despite the fact that the present reconstruction of 1692 is only two thirds of the original temple hall’s size. The massive building houses one of Japan’s largest bronze statues of Buddha (Daibutsu). The 15 meters tall, seated Buddha represents Vairocana and is flanked by two Bodhisattvas. 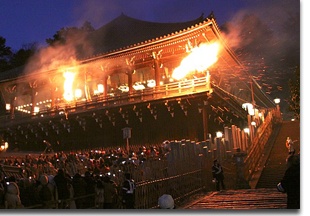 Omizutori is the commonly used name for Shunie, a series of events held annually from March 1 to 14 at Todaiji Temple. This collection of Buddhist repentance rituals has been held every year for over 1250 years, making it one of the oldest reoccurring Buddhist events in Japan. 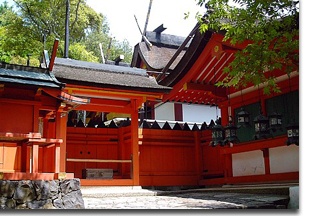 Kasuga Taisha (春日大社) is Nara’s most celebrated shrine. It was established at the same time as the capital and is dedicated to the deity responsible for the protection of the city. Kasuga Taisha was also the tutelary shrine of the Fujiwara, Japan’s most powerful family clan during most of theNara and Heian Periods. Like the Ise Shrines, Kasuga Taisha had been periodically rebuilt every 20 years for many centuries. In the case of Kasuga Taisha, however, the custom was discontinued at the end of the Edo Period.

Beyond the shrine’s offering hall, which can be visited free of charge, there is a paid inner areawhich provides a closer view of the shrine’s inner buildings. Furthest in is the main sanctuary, containing multiple shrine buildings that display the distinctive Kasuga style of shrine architecture, characterized by a sloping roof extending over the front of the building.

Kasuga Taisha is famous for its lanterns, which have been donated by worshipers. Hundreds of bronze lanterns can be found hanging from the buildings, while as many stone lanterns line its approaches. The lanterns are only lit twice a year during two Lantern Festivals, one in early February and one in mid August. 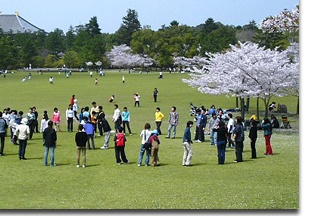 Nara Park (奈良公園, Nara Kōen) is a large park in central Nara. Established in 1880, it is the location of many of Nara’s main attractions including Todaiji, Kasuga Taisha, Kofukuji and the Nara National Museum.

The park is home to hundreds of freely roaming deer. Considered in Shinto to be messengers of the gods, Nara’s nearly 1200 deer have become a symbol of the city and have even been designated as a natural treasure. Nara’s deer are surprisingly tame, although they can be aggressive if they think you will feed them. Deer crackers are for sale around the park, and some deer have learned to bow to visitors to ask to be fed. 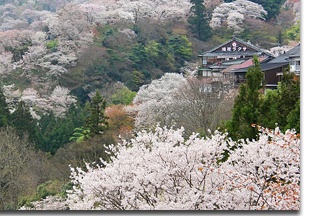 Mount Yoshino (吉野山, Yoshinoyama) in Yoshino Town, Nara Prefecture, is Japan’s most famouscherry blossom spot. It features over 30,000 cherry trees planted around the slopes which visitors can admire as they walk along the roads that lead up the mountain.

Yoshino also offers a rich history, which makes it an interesting destination at any time of the year. As the base of the pilgrimage trail to sacred Mount Omine, Yoshinoyama has been a center of Shugendo mountain worship for many centuries. The remote town also served various historical personalities as a refuge, including Emperor Go-Daigo who established a competing second imperial court there in the 14th century.

In 2004, Yoshino, together with Mount Koya and Kumano, was designated a cultural UNESCO World Heritage Site named the “Sacred Sites and Pilgrimage Routes in the Kii Mountain Range”. 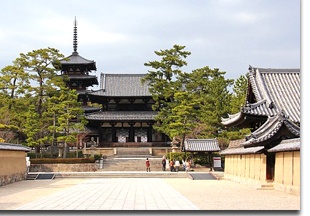 Founded in 607 AD by Prince Shotoku, who is attributed with having introduced Buddhism to Japan, Horyuji (法隆寺, Hōryūji) is one of Japan’s oldest temples. Its main hall, five story pagoda and central gate, all located in the temple’s Saiin Garan (Western Precinct), are the world’s oldest surviving wooden structures.

Next to the Saiin Garan is Daihozoin (or Great Treasure Hall), a newly-constructed hall built in 1998 to exhibit a part of the temple’s historied art collection. On the other side of the temple grounds, the main attraction of the Toin Garan (Eastern Precinct) is the octogonally-shaped Yumedono, the Hall of Visions.

In 1993, Horyuji was designated a UNESCO world heritage site. Unlike many other historic attractions in Japan, Horyuji is wheelchair accessible and provides pamphlets in various foreign languages.