With over two million inhabitants, Nagoya (名古屋) is Japan’s fourth most populated city. It is the capital of Aichi Prefecture and the principal city of the Nobi plain, one of Honshu’s three large plains and metropolitan and industrial centers.

Nagoya developed as the castle town of the Owari, one of the three branches of the ruling Tokugawa family during the Edo Period. Many cities, including most of its historic buildings were destroyed in the air raids in 1945. The Toyota Motor Corporation maintains its headquarters just outside of Nagoya.

Japan’s leading car manufacturer, Toyota, has its headquarters and many of its domestic production plants in the region around Nagoya. The company’s headquarters are located in the city of Toyota, less than one hour east of central Nagoya. Next to the headquarters stands the Toyota Kaikan Museum, where Toyota displays its new models and technologies to the public and periodically holds robot shows.

The Kaikan Museum also serves as the meeting point for plant tours. Tours are held once daily from Monday to Friday in English and Japanese. If you wish to join a tour, you need to make an advance reservation via the internet or by phone. Tours last approximately two hours and are free of charge. 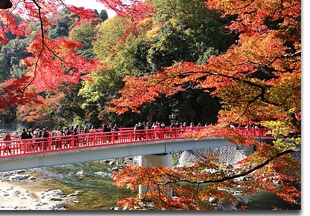 Korankei (香嵐渓, Kōrankei) is a valley near Nagoya reputed to be one of the best spots for autumn colors in the Chubu Region. Shaping the valley is the 254 meter tall Mount Iimori, on which Kojakuji Temple stands. In the 17th century, the head priest of Kojakuji planted some maple trees along the temple approach, prompting many locals to do the same in the area. Today, visitors to Korankei can see the fruits of these past efforts, in the form of excellent autumn scenery that peak around mid to late November each year. The best colors tend to appear around the paths along Tomoe River at the western and southern sides of Mount Iimori. Visitors can enjoy lovely sights of maple tree tunnels and autumn colors in combination with views of the river and the few bridges across it. The vermillion Taigetsukyo Bridge is the symbol of Korankei and a great picture-taking spot. 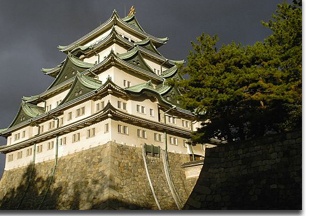 Nagoya Castle was built in the beginning of the Edo Period as the seat of one of the three branches of the ruling Tokugawa family, the Owari branch. As such, it was one of the largest castles in the country, and the castle town around it ultimately grew to become Japan’s fourth largest city.

Most castle buildings were destroyed in the air raids in 1945, including the castle keep and the palace buildings. The current ferro-concrete reconstruction of the castle keep dates from 1959 and contains a modern museum with exhibits about the castle’s history. The park surrounding the castle keep features two circles of moats and impressive walls with corner turrets. It becomes an attractive hanami spot during the cherry blossom season which usually peaks in late March or early April. 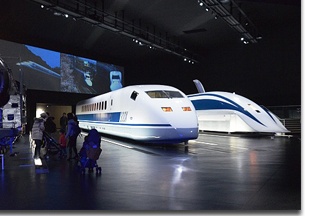 Opened in 2011, the SCMAGLEV and Railway Park is the railway museum of Central Japan Railways(JR Central). The museum seeks to educate visitors on the advances in high speed rail in Japan and displays a number of actual trains including historic steam locomotives, world record setting experimental shinkansen (bullet train) and the latest magnetic levitating trains (maglev).

A collection of 39 retired train cars are displayed in the museum. Many of these can be entered or viewed from underneath, and are accompanied by a host of exhibits explaining the different parts of the trains and all aspects of their operation and maintenance. Another section of the museum is dedicated to maglev trains and JR Central’s plans to construct a maglev high speed link between Tokyo and Osaka. The second floor of the museum also has lots of learning experiences, which are specifically geared toward young children. 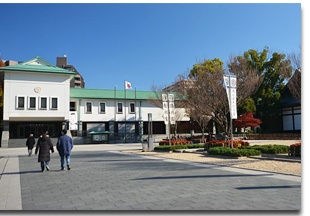 During the Edo Period (1600-1868), Nagoya served as the seat of the Owari, one of the three major branches of the ruling Tokugawa family. The family amassed great wealth that was only surpassed by four of the 200 feudal domains of the Edo Period. The Tokugawa Art Museum was built on the grounds of the Owari’s former feudal residence and preserves and exhibits several of their treasures including samurai armor and swords, tea utensils, noh masks and costumes, poems, scrolls and maps.

Next to the museum is Tokugawa-en, a beautiful Japanese landscape garden with a large pond at its center. The garden used to be part of a retirement residence of the local lords, but was destroyed during the war. In 2001 the garden was restored and reopened to the public in 2004. A large network of walking trails lead around the grounds to a tea house, rest houses, and across several bridges. The garden is best in spring, when its Peony (mid to late April) and Iris gardens (late May to early June) bloom, and during the autumn season (November).