Mount Fuji (富士山, Fujisan) is with 3776 meters Japan’s highest mountain. It is not surprising that the nearly perfectly shaped volcano has been worshiped as a sacred mountain and experienced big popularity among artists and common people throughout the centuries. Mount Fuji is an active volcano, which most recently erupted in 1708. It stands on the border between Yamanashi and Shizuoka Prefectures and can be seen from Tokyo and Yokohama on clear days. Another easy way to view Mount Fuji is from the train on a trip between Tokyo and Osaka. If you take the shinkansen from Tokyo in direction of Nagoya, Kyoto and Osaka, the best view of the mountain can be enjoyed from around Shin-Fuji Station on the right hand side of the train, about 40-45 minutes into the journey. Note however, that clouds and poor visibility often block the view of Mount Fuji, and you have to consider yourself lucky if you get a clear view of the mountain. Visibility tends to be better during the colder seasons of the year than in summer, and in the early morning and late evening hours than during the middle of the day. If you want to enjoy Mount Fuji at a more leisurely pace and from a nice natural surrounding, you should head to the Fuji Five Lake (Fujigoko) region at the northern foot of the mountain, or to Hakone, a nearby hot spring resort. Mount Fuji is officially open for climbing during July and August via several routes. 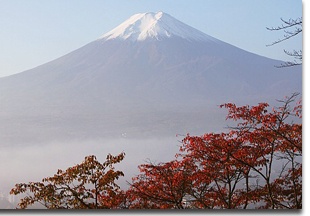 Climbing Mount Fuji (3776 meters), Japan’s highest and most prominent mountain, can make for lifelong memories. The mountain itself may look more attractive from afar than from close up, but the views on clear days and the experience of climbing through the early morning hours among hundreds of equally minded hikers from across the world, are very rewarding.

Please note climbing Mount Fuji is very popular not only among Japanese but also foreign tourists, who seem to make up more than a third of all hikers. The peak season for climbing Mount Fuji is during the school vacations which last from around July 20 to the end of August. The peak of the peak is reached during the Obon Week in mid August, when climbers literally have to stand in queues at some passages.

While you may want to avoid the Obon Week, we believe that by avoiding the crowds in general, you would miss out one of the most interesting aspects of climbing Mount Fuji, which is the camaraderie and unique experience of ascending the mountain among hundreds of equally minded people from across the world.

In order to encounter neither too large nor too small crowds, we recommend to climb Mount Fuji on a weekday in the first half of July before the start of the school vacations. The downside of a climb in early July is the weather, which tends to be somewhat more unstable than later in the season. 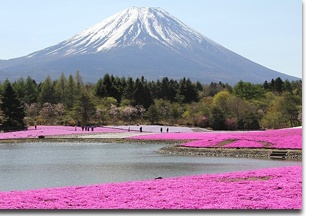 The Fuji Shibazakura Festival (富士芝桜まつり, Fuji Shibazakura Matsuri) is one of the best and most popular occasions nationwide to see shibazakura (pink moss or phlox moss in English). The venue of the festival is located about three kilometers south of Lake Motosuko in the Fuji Five Lakes area, offering breathtaking views of vast fields of shibazakura, with Mount Fuji in the backdrop on clear days.

The festival is typically held from mid April through early June. The best time to see the flowers varies from year to year but usually falls into the first three weeks of May. Approximately 800,000 stalks of shibazakura of five varieties are on display, producing delightful fields of pink, white and purple colors in different hues. Festival stalls selling pots of pink moss, shibazakura-themed souvenirs, food and local produce complete the experience.

As the venue of the Fuji Shibazakura Festival can get quite crowded due to its popularity, it is advisable to avoid visiting on weekends or over the Golden Week holidays. Visiting early in the mornings is generally good to avoid congestion and for good visibility, although lighting for photos tends to be better in the afternoon. 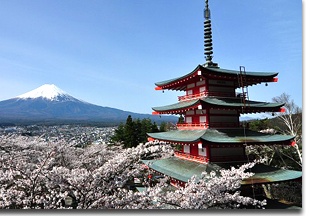 Have you ever see this pagoda with Mt.Fuji? You may not know this pagoda’s name, the Chureito Pagoda (忠霊塔, Chūreitō) is a five storied pagoda on the mountainside overlooking Fujiyoshida City and Mount Fuji off in the distance. The pagoda is part of the Arakura Sengen Shrine and was built as a peace memorial in 1963 nearly 400 steps up the mountain from the shrine’s main buildings.

The location offers spectacular views of Mount Fuji in combination with the pagoda, especially during the cherry blossom season in mid April when there are hundreds of trees in bloom and during the autumn color season which usually takes place in the first half of November. The spot is particularly popular among photographers as it allows for some wonderfully stereotypical shots of Japan. 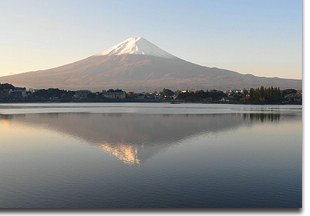 The Fuji Five Lake (富士五湖, Fujigoko) region lies at the northern base of Mount Fuji about 1000 meters above sea level around the lakes Kawaguchiko, Saiko, Yamanakako, Shojiko and Motosuko. It is one of the best places to view Mount Fuji from a close distance and a good base for climbing the mountain.

Fujigoko is known as a lake resort area, where hiking, camping, fishing and snow sports are among the popular outdoor activities that can be enjoyed. There are also plenty of hot springs and museums found in the area, along with Fuji Q Highland, one of Japan’s most popular amusement parks with record breaking roller coasters.

Among the lakes, Lake Kawaguchiko is the easiest to access and offers the most things to see and do for the average foreign traveler. The four other lakes are less developed than Lake Kawaguchiko and are not as easy to access by public transportation. 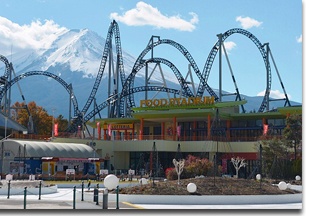 Fuji-Q Highland (富士急ハイランド) is a major amusement park located in the Fuji Five Lakes region at the foot of Mount Fuji. One of Japan’s most popular theme parks, Fuji-Q Highland is best known for its thrilling, record holding roller coasters and elaborate, anime themed rides and attractions. The park strives to be at the forefront of theme park entertainment, and has been constantly opening new rides and attractions, including Guinness World Record breaking roller coasters.

Currently, the park has four major roller coasters. Fujiyama, the park’s centerpiece attraction, was the world’s tallest and fastest roller coaster when it opened in 1996, and it continues to rank among the best coasters in the world. Dodonpa (2001) is currently the parks speediest coaster and the world record holder for fastest acceleration. Eejanaika (2006), a “4th dimension” roller coaster with seats rotating within the car, has the most inversions of any roller coaster. Finally, Takabisha, built in 2011, is the steepest roller coaster in the world, dropping at an angle of 121 degrees.

Hot spring baths can be enjoyed at ryokan and public bath houses across the Fuji Five Lake region. Some of the baths come with views of Mount Fuji, especially those located in the ryokan and hotels along the northeastern shores of Lake Kawaguchiko.

Day trip visitors have the option to visit public bath houses as well as the baths of a few ryokan and hotels which open their baths to non-staying visitors during daytime.