Kyoto (京都, Kyōto) served as Japan’s capital and the emperor’s residence from 794 until 1868. It is now the country’s seventh largest city with a population of 1.4 million people and a modern face. Over the centuries, Kyoto was destroyed by many wars and fires, but due to its historic value, the city was dropped from the list of target cities for the atomic bomb and spared from air raids during World War II. Countless temples, shrines and other historically priceless structures survive in the city today. 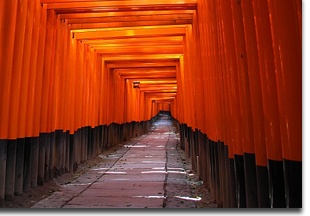 Fushimi Inari Shrine (伏見稲荷大社, Fushimi Inari Taisha)is located just outside JR Inari Station, the second station from Kyoto Station along the JR Nara Line (5 minutes, 140 yen one way from Kyoto Station, not served by rapid trains). Fushimi Inari Shrine is an important Shinto shrine in southern Kyoto. It is famous for its thousands of vermilion torii gates, which straddle a network of trails behind its main buildings. The trails lead into the wooded forest of the sacred Mount Inari, which stands at 233 meters and belongs to the shrine grounds.

Fushimi Inari is the most important of several thousands of shrines dedicated to Inari, the Shinto god of rice. Foxes are thought to be Inari’s messengers, resulting in many fox statues across the shrine grounds. Fushimi Inari Shrine has ancient origins, predating the capital’s move to Kyoto in 794.While the primary reason most foreign visitors come to Fushimi Inari Shrine is to explore the mountain trails, the shrine buildings themselves are also attractive and worth a visit. 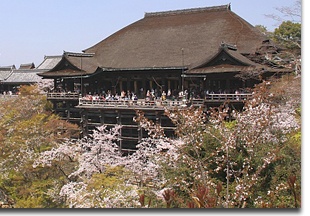 Kiyomizudera (清水寺, literally “Pure Water Temple”) is one of the most celebrated temples of Japan. It was founded in 780 on the site of the Otowa Waterfall in the wooded hills east of Kyoto, and derives its name from the fall’s pure waters. The temple was originally associated with the Hosso sect, one of the oldest schools within Japanese Buddhism, but formed its own Kita Hosso sect in 1965. In 1994, the temple was added to the list of UNESCO world heritage sites.

Kiyomizudera is best known for its wooden stage that juts out from its main hall, 13 meters above the hillside below. The stage affords visitors a nice view of the numerous cherry and maple trees below that erupt in a sea of color in spring and fall, as well as of the city of Kyoto in the distance. The main hall, which together with the stage was built without the use of nails, houses the temple’s primary object of worship, a small statue of the eleven faced, thousand armed Kannon. 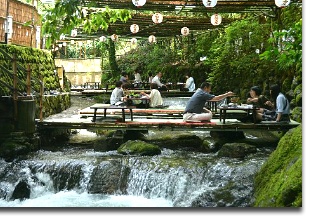 Kibune (貴船, lit. yellow boat) is a small town in a forested valley in the northern mountains of Kyoto City, which developed around Kibune Shrine. According to legend, a goddess traveled in a yellow boat (hence the name Kibune) from Osaka all the way up the river into the mountains north of Kyoto, and Kibune Shrine was built at the site where her boat journey had come to an end.

From June to September, Kibune’s restaurants build covered platforms out over the river where visitors can enjoy a meal as the water flows beneath them. Known as kawadoko, dining on the platforms is a relaxing experience and an excellent way to escape the summer heat. Most restaurants serve kaiseki meals that range in price from 3,000 to 20,000 yen per person. Reservations are recommended in the evenings and on busy days. 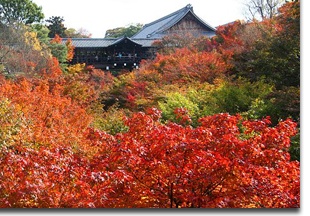 Tofukuji (東福寺, Tōfukuji) is a large Zen temple in southeastern Kyoto that is particularly famous for its spectacular autumn colors. The temple was founded in 1236 at the behest of the powerful Fujiwara clan. Its name is a combination of the names of two great temples in Nara that were also associated with the Fujiwara, Todaiji Temple and Kofukuji Temple. Tofukuji has historically been one of the principal Zen temples in Kyoto, and is a head temple of one of the schools of the Rinzai sect of Zen Buddhism.

In autumn, people come from all over Japan to see Tofukuji’s autumn colors. The most popular view is of the Tsutenkyo Bridge, which spans a valley of lush maple trees. The view from the bridge is equally spectacular, and the 100 meter long, covered walkway becomes extremely crowded when the colors reach their peak, usually around mid to late November. 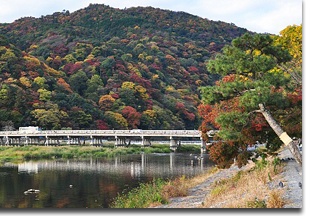 Arashiyama (嵐山) is a pleasant, touristy district in the western outskirts of Kyoto. The area has been a popular destination since the Heian Period (794-1185), when nobles would enjoy its natural setting. Arashiyama is particularly popular during the cherry blossom and fall color seasons.

The Togetsukyo Bridge is Arashiyama’s well known, central landmark. Many small shops, restaurants and other attractions are found nearby, including Tenryuji Temple, Arashiyama’s famous bamboo groves and pleasure boats that are available for rent on the river.

North of central Arashiyama the atmosphere becomes less touristy and more rural, with several small temples scattered along the base of the wooded mountains. The area north of the Togetsukyo Bridge is also known as Sagano, while the name “Arashiyama” technically just refers to the mountains on the southern bank of the river but is commonly used to name the entire district. 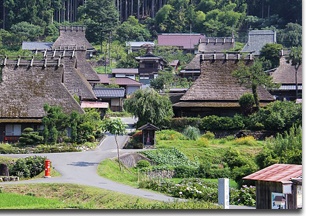 Miyama (美山) is a remote, rural area in the mountains 30 kilometers north of central Kyoto. The area is famous for its traditional, thatched roof (kayabuki) farmhouses of which over 200 can be seen dotting the countryside. Unlike those found in many other historic towns and districts around the country, the majority of Miyama’s old houses survive as residential dwellings where people still live and work. This in turn lends a very nostalgic atmosphere to the area, and gives visitors a chance to experience the traditional, authentic feel of rural Japan.

Miyama is made up of multiple small villages and hamlets scattered along its narrow, winding valleys. The main attraction among them is the northern village or Kayabuki no Sato, which features nearly 40 farmhouses with thatched roofs and has a higher percentage of thatched roof houses than any other place in Japan. Visitors can stroll around the village, but here too, most houses are private homes that cannot be entered.