Located in the central part of mainland Japan, Kanazawa boasts many historical attractions such as restored residences and districts, as well as modern museums. Though Kanazawa’s main attraction is the Kenrokuen garden, one of Japan’s “three best landscape gardens”. 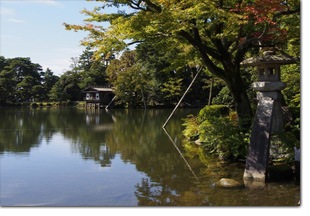 Kenrokuen garden is considered one of the three most beautiful landscape gardens in Japan. The spacious grounds used to be the outer garden of Kanazawa Castle and were constructed by the ruling Maeda family over a period of nearly two centuries. Opened to the public in 1871, Kenrokuen features a variety of flowering trees which provide the garden with a different look for each season. Kenroku-en is located on a hill in the central part of the city of Kanazawa.

There are many fascinating museums throughout Kanazawa city, including the Prefectural Art and History museum, which hosts local Kanazawa arts and history exhibitions, Honda museum, showcasing samurai weapons paintings and calligraphy and the 21st Century Museum of Contemporary Art, a popular museum exhibiting contemporary art by acclaimed artists from around the world.

Located at the foot of the former Kanazawa Castle, this district preserves a historic atmosphere with its remaining samurai residences, earthen walls, private entrance gates, narrow lanes and water canals. Take a step back in time and experience Japan as it was centuries ago.

Kanazawa’s most famous geisha district. Quite a few of the buildings have been converted into speciality shops and teahouses. Behind this area is a temple district, and the roads between the main road and the mountain are a twisting labyrinth of narrow lanes perfect for exploring on foot. 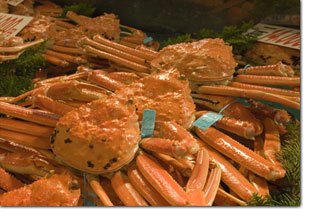 Crab is a local favourite served up during the winter months, common types include the hairless male crab (zuwaigani) or smaller female crabs with eggs still attached served in Japanese style hotpots. Sushi made with fish from the neighbouring sea is also popular, the prawns are especially good in this region.