Kamakura (鎌倉) is a coastal town in Kanagawa Prefecture, less than an hour south of Tokyo. Kamakura became the political center of Japan, when Minamoto Yoritomo chose the city as the seat for his new military government in 1192. The Kamakura government continued to rule Japan for over a century, first under the Minamoto shogun and then under the Hojo regents.

After the decline of the Kamakura government in the 14th century and the establishment of its successor, the Muromachi or Ashikaga government in Kyoto, Kamakura remained the political center of Eastern Japan for some time before losing its position to other cities.

The main sightseeing spots in Kamakura include: 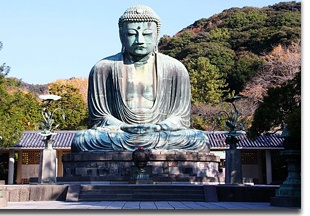 The Great Buddha of Kamakura (Kamakura Daibutsu) is a bronze statue of Amida Buddha, which stands on the grounds of Kotokuin Temple. With a height of 13.35 meters, it is the second tallest bronze Buddha statue in Japan, surpassed only by the statue in Nara’s Todaiji Temple.

The statue was cast in 1252 and originally located inside a large temple hall. However, the temple buildings were destroyed multiple times by typhoons and a tidal wave in the 14th and 15th centuries. So, since 1495, the Buddha has been standing in the open air. 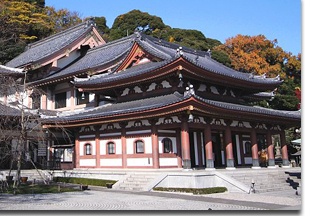 Hasedera is a temple of the Jodo sect, that is most famous for its statue of Kannon, the goddess of mercy. The statue shows Kannon with eleven heads, each representing a characteristic of the goddess. The 9.18 meter tall, gilded wooden statue is regarded as one of the largest wooden sculpture in Japan, and can be viewed in the temple’s main building, the Kannon-do Hall. It was carved from the same tree as the similarly tall Kannon statue worshipped at the Hasedera Temple in Nara Prefecture.

Hasedera is built along the slope of a wooded hill. A pretty garden with ponds is found at the base of the slope just after entering. The temple’s main buildings are built further up the slope, reached via stairs. Along the way stands the Jizo-do Hall with hundreds of small statues of the Jizo Bodhisattva who helps the souls of dead children to reach the paradise. 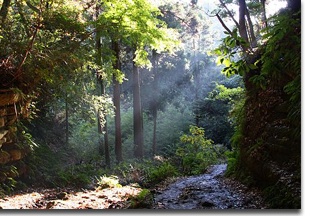 Kamakura is surrounded by the ocean in the south and by wooded hills in all other directions. Attractive hiking trails lead through the woods along these hills and connect various atmospheric temples. They are a great way to travel between some of Kamakura’s sights.

Western Hills – The Daibutsu Hiking Course connects Jochiji Temple in Kita-Kamakura with the Great Buddha (Daibutsu) in the west of the city. It takes about 60-90 minutes to complete the entire trail.

Northern Hills –  The Tenen Hiking Course connects Kenchoji Temple in Kita-Kamakura with Zuisenji Temple in the east of the city, leading mostly along the ridge of the hills. The whole trail takes about 60-90 minutes to complete.

Eastern Hills – The Gionyama Hiking Course connects Myohonji Temple, Yagumo Shrine and the Harakiri Yagura. The trail is shorter than the other two, taking about 30 minutes to complete.

The trails are not paved and are narrow and steep at times. It is recommended to explore them only during dry weather and with good walking shoes. 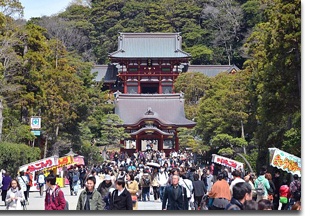 Tsurugaoka Hachimangu is Kamakura’s most important shrine. It was founded by Minamoto Yoriyoshi in 1063, and enlarged and moved to its current site in 1180 by Minamoto Yoritomo, the founder and first shogun of the Kamakura government.

The shrine is dedicated to Hachiman, the patron god of the Minamoto family and of the samurai in general. The deified spirits of the ancient Emperor Ojin who has been identified with Hachiman, Hime-gami and Empress Jingu are enshrined at Tsurugaoka Hachimangu Shrine. The shrine is reached via a long, wide approach that leads from Kamakura’s waterfront through the entire city center, with multiple torii gates along the way. The main hall (Hongu or Jogu) stands on a terrace at the top of a wide stairway. The main hall includes a small shrine museum, which displays various treasures owned by the shrine, such as swords, masks and documents. 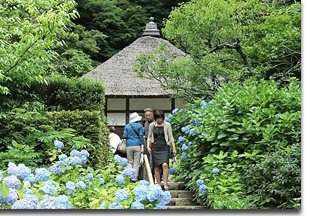 Meigetsuin Temple (明月院) is a temple of the Rinzai Zen Sect founded in 1160 in Kamakura. It is also known as Ajisaidera (“Hydrangea Temple”) because hydrangea bloom in abundance on the temple grounds during the rainy season around June. 95% of the hydrangea here are of the Hime Ajisai (“Princess Hydrangea”) variety; they are thus named because of their pretty blue colors.

The temple was originally a repose built by a son in memory of his father who had died in the struggle for power between the Taira and Minamoto clans in the late Heian Period. It later became part of a larger temple complex called Zenkoji, which was abolished during anti-Buddhist movements soon after the Meiji Restoration, leaving only Meigetsuin to remain as an individual temple today. 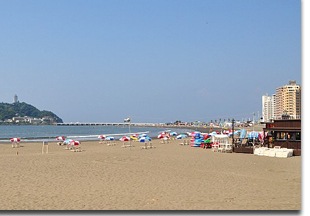 Only a short train ride west of Kamakura, Enoshima (江の島) is a pleasantly touristy island just off coast but connected by bridge with the mainland. The island offers a variety of attractions, including a shrine, park, observation tower and caves. Views of Mount Fuji can be enjoyed on days with good visibility.

Enoshima is divided into a yacht harbor accessible to motorized traffic and a forested hill which can only be explored on foot (and paid escalators) and contains most of the sights. Several shrine buildings, collectively known as Enoshima Shrine, are found around the island and are dedicated to Benten, a popular goddess of good fortune, wealth, music and knowledge. Benten is believed to have created Enoshima before subduing a five headed dragon that had been terrorizing the area.