Hakone (箱根) is part of the Fuji-Hakone-Izu National Park, less than 100 kilometers from Tokyo. Famous for hot springs, natural beauty and the view of nearby Mt. Fuji, Hakone is one of the most popular destinations among Japanese and international tourists looking for a break from Tokyo.

The main areas in Hakone include: 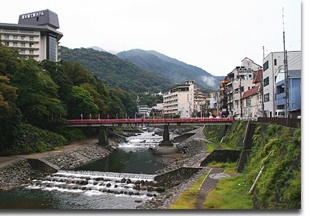 Hakone has been one of Japan’s most popular hot spring resorts for centuries. Nowadays, more than a dozen springs provide hot spring water to the many bath houses and ryokan in the Hakone region.

Yumoto, at the entrance to the Hakone area near Odawara, is Hakone’s most famous hot spring with a particularly long history, high quality water and numerous baths and inns. Many more hot spring facilities are found across the hills and valleys of Hakone and along the shores of Lake Ashi. 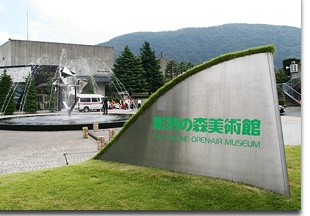 The Hakone Open Air Museum (箱根彫刻の森美術館, Hakone Chōkoku No Mori Bijutsukan), successfully attempts to create a harmonic balance of nature and art by exhibiting various sculptures on its spacious grounds in combination with beautiful views of the surrounding valley and mountains. 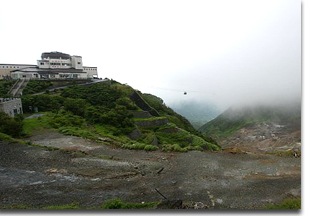 Owakudani (大涌谷, Ōwakudani) is the area around a crater created during the last eruption of Mount Hakone some 3000 years ago. Today, much of the area is an active volcanic zone where sulfurous fumes, hot springs and hot rivers can be experienced. Additionally, Owakudani has good views of Mount Fuji on clear days.

A short walking trail (about ten minutes one way) leads from the ropeway station into the volcanic zone to a number of steam vents and bubbling pools. Here you can purchase eggs, cooked in the naturally hot water, whose shells are blackened by the sulfur and which are said to prolong one’s life by seven years. 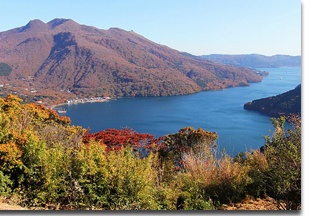 Lake Ashinoko (芦ノ湖, Ashinoko) was formed in the caldera of Mount Hakone after the volcano’s last eruption 3000 years ago. Today, the lake with Mount Fuji in the background is the symbol of Hakone. The lake’s shores are mostly undeveloped except for small towns in the east and north and a couple of lakeside resort hotels.

Note however, that clouds and poor visibility often block the view of Mount Fuji, and you have to consider yourself lucky if you get a clear view of the mountain. Visibility tends to be better during the colder seasons of the year than in summer, and in the early morning and late afternoon hours. 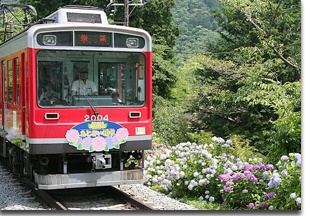 A ride on the Hakone Tozan Railway (箱根登山電車, Hakone Tozan Densha), Japan’s oldest mountain railway, is a treat for more than just railway fans. The small trains wind themselves through a narrow, densely wooded valley over many bridges and tunnels, stopping at small stations along the way and changing directions at three switchbacks.

The Hakone Tozan Line consists of two sections. The lower section from Odawara to Hakone-Yumoto is used by Odakyu trains from central Tokyo and is not particularly noteworthy. Far more spectacular is the upper section from Hakone-Yumoto to Gora, which is served by the small mountain trains. At Gora, many travelers transfer to the cablecar for Lake Ashi.

The 35 minute train ride from Hakone-Yumoto to Gora is especially beautiful in June and July when thousands of hydrangea (ajisai) are in bloom along the tracks and are illuminated during the evenings. The ajisai are usually best around the beginning of July and can be seen from the trains and around the stations. 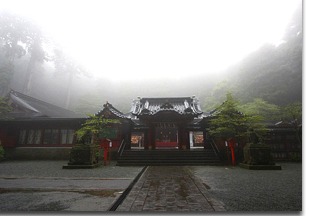 Hakone Shrine (箱根神社, Hakone Jinja) stands at the foot of Mount Hakone along the shores of Lake Ashi. The shrine buildings are hidden in the dense forest, but are well advertised by its hugetorii gates, one standing prominently in the lake and two others over the main street of Moto-Hakone.

A path leads from the torii gate in Lake Ashi up a series of steps flanked by lanterns through the forest to the main building of the shrine, which sits peacefully among the tall trees. The shrine is beautiful throughout the year, and is particularly breathtaking when shrouded in mist.

A second shrine, Mototsumiya (“original shrine”) stands at the summit of Komagatake, one of Mount Hakone’s multiple peaks. It is accessible by the Komagatake Ropeway from Hakone-en or via hiking trails.